Auto thefts increased significantly in the United States in the first three months of 2022. According to the National Insurance Crime Bureau (NICB), an insurance industry-funded research group, nearly a quarter of a million vehicle thefts were reported from January to March 2022. This compares to 2021 when 936,315 Americans had their cars stolen.

Car thefts had declined for two years before the COVID-19 pandemic hit. But something about the slowing economic fortunes of many Americans and a reduction in the total number of miles we travel has reversed that trend.

The risk is not the same everywhere

The increase in vehicle theft is not universal, reports the NICB. Some regions have seen a dramatic spike. Residents of Washington, DC saw their risk increase by 40% in just one year. Colorado saw a similar increase, up almost 36%.

Bakersfield, Calif., has had the highest auto theft rate in the country for the past two years. But there is little consistency in the numbers. The five areas with the highest theft rates represent both the coasts and several mid-states and include heavily urban and mostly rural states.

Thieves use technology to target vehicles

They will scan a targeted house for key fob signals, and using a device, thieves can hack a signal and transmit it to another person near the car. Depending on the strength, criminals can break in or even steal the vehicle.

They also use tracking devices like Apple AirTags. Law enforcement authorities say thieves have started using tracking devices placed around the car, such as behind the license plate of a targeted vehicle. However, some vehicle owners also keep tracking devices in their cars so that if stolen, they can locate them.

If you find yourself in the situation of a stolen vehicle with a tracking device, always call the authorities and alert them before trying to find it on your own.

According to the NICB, between 2016 and 2020, these states had the highest auto theft rate per 100,000 population (NICB treats Washington, DC, as one state for statistical purposes):

The NICB treats Puerto Rico as a state for statistical purposes.

The most stolen cars

The list of commonly stolen cars mirrors the list of top-selling vehicles in most years. This is true as they are readily available and their coins are worth more as they are in high demand. See the 10 most stolen cars in 2021 (the most recent year for NICB statistics) below. 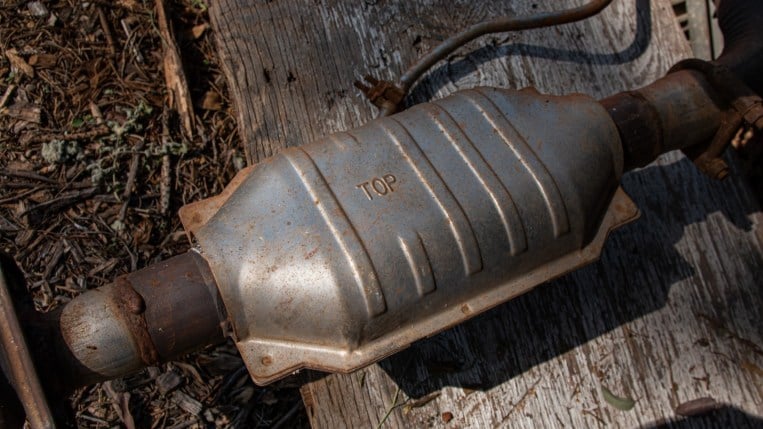 In addition to vehicle theft, the NICB says thieves have started targeting expensive catalytic converters in recent years. The theft of these devices has skyrocketed with a 1,215% increase since 2019.

A catalytic converter is a loaf-sized device (larger on vehicles with larger engines) in your car’s exhaust system. It is located in front of the muffler, often near the center of the vehicle, and easily accessible from below.

The catalytic converter helps filter harmful pollutants from your car’s exhaust. It sends hot exhaust gases through a honeycomb of rare metals, like rhodium and palladium, which act like sponges, soaking up harmful chemicals.

It is these rare metals that have created a crime wave related to catalytic converters. Their prices have skyrocketed recently, making a relatively new converter worth several thousand dollars.

Thieves can remove them in minutes by sliding them under the car and prying them out of the exhaust system with a power saw.

Tips to keep your car safe

Thieves target cars that put them at least risk. So a few common-sense steps can encourage them to bypass your vehicle and search for an easier mark.

PRO TIP 1: Avoid “huffing” or keeping your vehicle on while running a race. Warming up and leaving a car unattended in some states and municipalities is illegal. Many owners also leave key fobs inside, making vehicles an easy target for thieves. See more protection tips below.

RELATED: Cars that use digital keys

According to the NICB, remote starters allow car owners to start the engine while keeping the vehicle locked, without the presence of a key or fob.

Experts say parking inside is the best defense if you’re worried about thieves stealing your new car’s catalytic converter. When that’s not possible, park in well-lit areas and consider installing a security camera. Several companies make guards you can install that are designed to make removing the converter take too long to be worth a thief’s time. But we haven’t seen any studies examining whether guards deter thieves.

Minnesota’s population growth has come to a halt in the past year, rocked by COVID-19, slowing immigration rates and more people leaving the state. Overall, the state’s population grew by only 225 people in the most recent year, which ran from July 1, 2020 to June 30, 2021. It is the fastest growing slow state […]

Production of battery-electric vehicles rose 6.5% in the first six months to record highs, according to new data from the Society of Motor Manufacturers and Traders. Although UK car manufacturing has fallen by a fifth in the past six months, many see light at the end of the tunnel with industry support for electric vehicles. […]